In her inspiring sermon "The People's Idea of God" (p. 8) Mrs. Eddy says, "Mind is supreme; and yet we make more of matter, and lean upon it for health and life." Although acknowledging that God, divine Mind, is omnipotent, yet mortals, with utter disregard of logic, attribute power to materiality, and in the degree of this attribution become its slaves. They surrender to the erroneous belief which has no basis in fact, no foundation in truth, the merest figment of the imagination, with no more of stability than a fleeting dream. How completely mortals surrender to these phantoms is manifest as one contemplates the accustomed course of mankind. While each individual may seem to have a definite goal, yet in the aggregate the human tide has no true purpose, and no destination.

Christian Science has come to the world for a twofold purpose, namely, to reveal God's allness and man's true character and destiny as the son of the one Father-Mother God, infinite Mind, supreme over all, and to disclose the nothingness of the so-called material existence. Christian Science succeeds in proportion as its mandates are accepted and obeyed as divine commands. Its authority is derived from the only source of authority—divine Mind; its law is the law of Love, the emanation of the only source of love. Mortals, it seems, either fail to recognize these facts, or, having recognized them, fail to put them into operation. They hold to a power other than Mind as real and to reality other than God and His infinite universe of perfect ideas 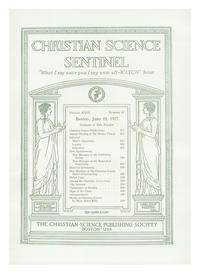