In your recent issue appear some comments on a lecture...

Ralph W. Still, Committee on Publication for the State of Texas,—El Paso

In your recent issue appear some comments on a lecture on Christian Science recently delivered in EI Paso in which questions are raised as to the consistency between certain of the lecturer's statements and the teachings of Mary Baker Eddy; also as between the teachings of Christian Science and those of the Scriptures. As a reply in explanation was requested, will you kindly grant space therefor? At the outset it may be explained that the difficulties many encounter in their attempts to gain a comprehension of Christian Science come of not gaining its spiritual meaning. It follows that there is a corresponding inability or reluctance to differentiate between the real or absolute and the unreal, as demonstrated in this purely metaphysical, or spiritual exposition of the Scriptures. Had our critic understood the clear distinction Christian Science draws between the real and the unreal he would not have been disturbed by any seeming discrepancy between what the lecturer said regarding the relationship between sin and sickness, and the teachings of Mrs. Eddy; for there is no such discrepancy.

It is true, as our critic avers, that Christian Science teaches that sin, sickness, and death are unreal; but nowhere in Mrs. Eddy's writings can there be found a single statement that even implies that these errors do not seem real, yes, "terribly real," in human experience; but being no part of the "very good" creation recorded in the first chapter of Genesis, they are without basis in Truth, hence unreal. What Christian Science teaches regarding the unreality of sin, sickness, and death is that these errors are neither created, sanctioned, nor supported by God, divine Love. It is self-evident that if this triad were real, that is, of God, even the Saviour could not have mastered them, for "whatsoever God doeth, it shall be for ever." In I John it is stated that the "Son of God" came to destroy the "works of the devil"—not God's works; but it is obvious that if sin were real it would be a factor of true Being, hence eternal, indestructible.

Send a comment to the editors
NEXT IN THIS ISSUE
Article
A preacher is reported in your recent issue as having... 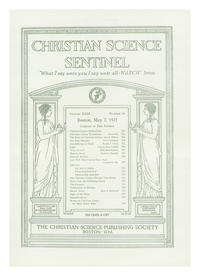