Among the fragmentary sayings of "Allozone" under...

Theodore Burkhart, Committee on Publication for the State of Oregon,—Oregon City

Among the fragmentary sayings of "Allozone" under the headline "Man and His Gods," in your recent issue, touching upon man's disposition to worship something or somebody, I find this remark: "We worship Aimee and Mrs. Eddy and the general that kills the most people." Regardless of who is meant by "we," or what the facts may be with respect to the other parties referred to, that is not true as to the attitude of Christian Scientists toward Mary Baker Eddy, the Discoverer and Founder of Christian Science. Your correspondent seems to have used this generalization to bring out a point, and presumably had no intention of seriously charging Christian Scientists with worshiping their Leader. Such remarks, however, indicate a thought regarding the relationship of Mrs. Eddy and her followers which uninformed readers are all too prone to accept, without stopping to think or to inquire into the facts. May I, therefore, make a brief statement to your readers to clear up any misapprehension they may have?

The beneficent fruits of Christian Science are a sufficient attestation of the high Christian character of its Discoverer, whose love for mankind was her actuating motive in laboring to restore the practice of primitive Christian healing. Through her teachings many thousands have been uplifted spiritually, and have found or regained health, happiness, and prosperity; the mentally unbalanced have been restored to sanity, and a multitude of others saved from lives of sin and degradation to become useful and honored citizens. It is but natural that those who have been the recipients of such blessings should be grateful to Mrs. Eddy and highly esteem, love, and revere her; but as faithful followers they do not allow their sense of gratitude to deteriorate into adoration of personality—which she herself forbade. As an instance of her directing the thought of her followers Godward, and away from contemplation of personality, she once notified the members of her church (The Mother Church, The First Church of Christ, Scientist, in Boston, Massachusetts) not to assemble at her residence at the time of their annual meeting and communion service, "for," said she, "the divine and not the human should engage our attention at this sacred season of prayer and praise." In sending the notice to The Christian Science Board of Directors she wrote, "Now is the time to throttle the lie that students worship me or that I claim their homage" (The First Church of Christ, Scientist, and Miscellany, pp. 27, 26).

Send a comment to the editors
NEXT IN THIS ISSUE
Article
I have read with interest and profit in a recent issue of... 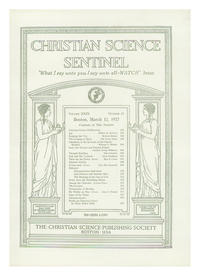