"Lord, teach us to pray"

Probably no subject which occupies the thought of mankind is of such vital importance, and in consequence comes so near the heart, as that of communing with our Maker in prayer. It is very likely that no two people would entirely agree as to the manner in which their innermost thoughts are expressed in petition to God for an answer to the heart's desires. Certain it is, however, that all, at some time, in stress of untoward conditions, when fears and doubts assail, or sickness and death attend, feel the need of appealing for help outside of themselves. This tendency, inherent within the heart, however callous it may seem to have become through contact with the world, is as natural as the turning of the flower toward the light.

Christ Jesus, the master Christian and Way-shower for all mankind, early learned how to approach the Father in prayer, growing through boyhood and young manhood into an ever closer acquaintance with Him, which ripened, through the fullness of his healing ministry, into the bond of perfect unity. As a natural result of this constant communion with the heavenly Father and absolute conformity to His will in both word and deed, the Master was enabled to heal the sick, cleanse the sinner, uplift the fallen, raise the dead, overcome the efforts of human hatred to stop his ministry and the progress of the truth, which he was sent to establish in the hearts of men, resurrect his body from the tomb in proof of the immortality of Life, and free himself completely from material encumbrances at the ascension. This unparalleled obedience to Love, divine Principle, was accomplished largely through prayer. 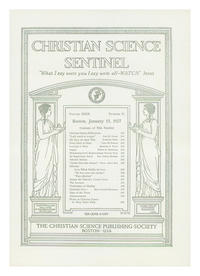