Christian Scientists may turn with profit to the history of the early Christian Church. During that period there were persecutions even unto death, which called forth the greatest devotion and consecration to the Christ. Material wealth was parted with gladly; and the so-called good things of material living were considered a snare. The aim, apparently, of these early Christian was to gain the wealth of spirituality. From the accounts we read of them, we may assume that this must have been true of most of them.

Constantine, emperor of the Eastern Roman Empire, issued two edicts of toleration for the Christians. It is open to question, however, if he really favored the Cause of Christianity when he gave it the protection of the state. Undoubtedly, the protection of the emperor was considered a wonderful boon at the time to the followers of the Master, for they were allowed to live in peace and to worship God without fear. But the danger lay in that very physical peace and in the wealth which quickly came to the church. As wealth accumulated, the grasp on spirituality was loosened until the church became merely a form of worship, and the power to heal the sick and raise the dead was lost. 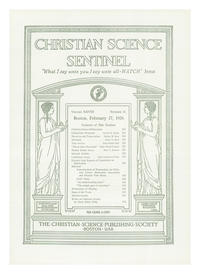