Christian Science is the great consoler, because it reveals reality to men, exposing and destroyinng the illusions of material sense, which are the causes of all human suffering and sorrow. Whatever the trouble may be, it is always the result of erroneous thinking; and this can be properly dealt with only by absolute reliance on Truth. "To be carnally minded is death," writes Paul to the Romans; "but to be spiritually minded is life and peace"—words which accurately depict the outcome of material-mindedness and positively state what inevitably results from its opposite, the Mind of Christ.

What has just been said is true whatever form the suffering or sorrow may seem to take. Where, then, is the primary fallacy? It lies in the error of belief that there is a creation other than God's spiritual creation—that is, that there is a material creation. Out of this error springs every human woe. It is the Adamic dream, the dream which mythology says fell upon mankind, and in the mistiness of which mankind still wanders, separated from the true sense of man's real being. 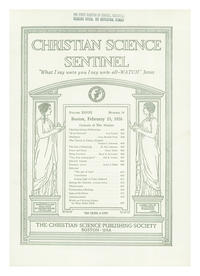