In a recent editorial, under the caption "Faith Healing,"...

Cecil E. Benjamin, Committee on Publication for the Cape of Good Hope, Union of South Africa,

In a recent editorial, under the caption "Faith Healing," you mention that you have previously drawn attention to what you consider to be the fallacies of Christian Science. As I have been unable to obtain access to these references, I cannot reply specifically, but would like to be allowed to state that while it is true that Christian Science introduces new ideas, new views of life that are irreconcilable with old theories, to those who understand it is essentially reasonable, logical, and capable of demonstration.

Students of Christian Science are in full sympathy with all who rely upon God for help in their problems; but Christian Science is not faith healing in the generally accepted sense, for it calls for something more than faith, in that its practice depends upon the understanding and application of definite spiritual law as taught and demonstrated by Christ Jesus, the greatest and surest healer the world has ever known. This spiritual law has always existed, and it is not supernatural but divinely natural. For three hundred years after his ascension the followers of our Master practiced and proved it in healing the sick and even in raising the dead. Then for centuries, through its material thinking, humanity lost sight of this law until in the year 1866 it was rediscovered by a pure, spiritually-minded New England woman, Mary Baker Eddy, who not only healed the sick by its means but explained her discovery so clearly in her book, "Science and Health with Key to the Scriptures," that thousands of others have since, to the extent of their understanding, been able to prove its availability. As a rule, humanity turns to Christian Science only when all else has failed; and testimonies from those healed of all manner of disease are published regularly each week and month in the Christian Science Sentinel and in The Christian Science Journal. They are also given by word of mouth every Wednesday evening in each of about two thousand Christian Science churches and societies in all parts of the world.

Send a comment to the editors
NEXT IN THIS ISSUE
Article
Your recent issues contianed accounts of remarks made... 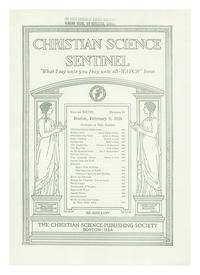