That which stands out most clearly in the narrative of the loaves and fishes is the fact that, in spite of the apparently big demand and small supply, the multitude, numbering "about five thousand men, beside women and children," received all that they needed; for we read in Luke that "they did eat, and were all filled." Had the multitude been a million times greater, Love's infinite supply could just as readily have been bestowed on one and all, according to their need. Perhaps some among the multitude waited, doubting and fearing whether and when their turn would come to be fed. Perhaps these same suggestions cause some to-day to wonder whether or when the healing, the regeneration for which they long, will be manifested. The answer to all such doubts and fears is that "they . . . were all filled."

On page 206 of the Christian Science textbook, "Science and Health with Key to the Scriptures," our Leader, Mrs. Eddy, says, "In the scientific relation of God to man, we find that whatever blesses one blesses all, as Jesus showed with the loaves and the fishes,—Spirit, not matter, being the source of supply." Every spiritual idea is included in God's consciousness, and every individual idea must be conscious of the bounty of infinite Mind. 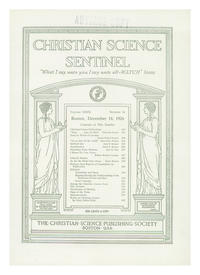