As a friendly guide and unfailing source of wise direction, the Manual of The Mother Church by Mary Baker Eddy grows daily in the appreciation of the Christian Scientist. As he peruses it he learns to use and understand more comprehensively the Rules and Bylaws which his Leader has there given him, and to feel increasing gratitude for the prayerful wisdom which surely prompted their publication. If, before his acquaintance with the Science of being, one had been an earnest Christian, he no doubt was in the habit of praying daily for himself and others. Sometimes his prayers were answered; at other times, they seemed all unavailing; and searchingly he may have asked himself, What is wrong with my prayers?

In taking up the systematic study of Christian Science, he finds that the first chapter of its textbook, "Science and Health with Key to the Scriptures" by Mrs. Eddy, has as its subject, "Prayer." He has not progressed very far in the perusal of this chapter before he finds his concepts of prayer undergoing a change. He realizes gratefully that no longer does he need to grope in the darkness of materiality, and blindly, albeit trustingly, to petition, as he has believed, a far-off Deity, for human favors. On pages 16 and 17 of this chapter our Leader has given, in remarkably lucid phraseology, the scientific interpretation of that prayer beloved of all Christians, the Lord's Prayer. In growing wonder and joy, the student finds that this interpretation of the prayer which he has used, perhaps for years, without deep revelation of its true and inward meaning, has revised his attitude toward God and his fellowmen, and so broadened and sweetened his sphere of thought that healing and helpfulness have resulted for himself and others. 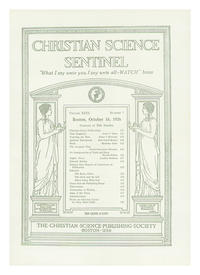