"Every man a penny"

In the story of the laborers in the vineyard, so beautifully told in Matthew's Gospel, the universality of divine Love is wonderfully depicted. The love of God is always being poured out on all equally, and all have an equal opportunity of demonstrating love; they have but to obey the rule as Mrs. Eddy teaches it on page 571 of the Christian Science textbook, "Science and Health with Key to the Scriptures": "Know thyself, and God will supply the wisdom and the occasion for a victory over evil."

In the story of the laborers in the vineyard, the householder started out early in the morning to find the needed laborers; and after he had agreed with them "for a penny a day, he sent them into his vineyard." In a similar way, in the early days of Christian Science, Mrs. Eddy had first of all to show, by healing many cases of sickness, the practical usefulness of her discovery before laborers could be attracted to the vineyard—she had to find a point of agreement; and as those most awake began to listen, and to recognize the usefulness of what she taught, they too went into the work of redeeming the world. As they worked, it began to be spread abroad that primitive Christian healing was being reinstated, and many came for help. In the third hour, as the parable relates, it was therefore easier to get the laborers with the promise that whatsoever was right should be given them; likewise, in the sixth and ninth hours.

Send a comment to the editors
NEXT IN THIS ISSUE
Article
"The way, the truth, and the life" 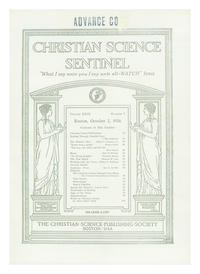