In a recent issue in the "Correspondence" column there...

David A. Giel, Committee on Publication for Holland,—Holland (translation)

In a recent issue in the "Correspondence" column there appears a casual remark about Christian Science healing which, though not made in a spirit of aggression or criticism, might establish a wrong concept of the teaching and practice of Christian Science, since the remark implies that Christian Science healing is a result of the exertion of will-power, of the will to be healed. As it is a matter of common interest that this misconception, which is rather widespread, be corrected, you will oblige me by granting space to the following remarks.

Christian Science distinguishes between the will which is manifested when one has "the mind of Christ,"—and therefore starts from the understanding of the infinite harmonious unity which is God, from the one true Mind,—and so-called human will, which is based upon belief in an innumerable, ever changing variety of human opinions. In speaking of will-power, people have in thought this personal will, which, because of its separative nature, believes in a power of its own, and therefore has to exert itself. Regarding this will we read in the Christian Science textbook, "Science and Health with Key to the Scriptures" by Mary Baker Eddy (p. 144): "Human will-power is not Science. Human will belongs to the so-called material senses, and its use is to be condemned. Willing the sick to recover is not the metaphysical practice of Christian Science, but is sheer animal magnetism." This quotation makes it sufficiently clear that in Christian Science the human will is no factor in healing. This will, the will to overcome, may lead one to seek the help of Christian Science, but the healing itself can take place only as the healing truth enters the mentality which has become receptive to it. This is not a process of will-power, but of understanding, of awakening. To hear the "still small voice" of Truth one must silence all other voices, even those of personal will and imagination. He that has the spirit of Christ is carrying out the will of the Almighty, and therefore has no more need of any power of his own than the person who applies a mathematical law, the efficacy in both cases lying in the truth itself. He that applies it profits by his knowledge, or acknowledgment, of that truth.

Send a comment to the editors
NEXT IN THIS ISSUE
Article
In reply to a gentleman writing on Christian Science in... 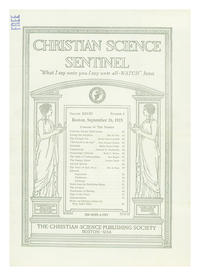