"Be kindly affectioned one to another with brotherly love; in honour preferring one another." These words of Paul to the Romans were written to impress upon them the necessity of cultivating one of the greatest of Christian virtues,—affection. When one thinks of it, how little pure affection is evidenced among men as they come into touch the one with the other in the performance of the tasks of everyday life! Their dealings with each other may be honest, honorable, moral, but many would be inclined to smile in amazement were they asked if they carried affection with them into their business relationships. And yet, to be "kindly affectioned ... with brotherly love" is what the great Apostle to the Gentiles expected of all Christians.

The fact that kindly affection is so frequently absent is cause for reflection. Why is it so? Why is there not greater spontaneity among men in the showing of kindly regard for each other's well-being than there often appears to be? Many reasons might be adduced; but unquestionably the one which applies most generally is the simple one that on the whole men have not yet grasped to any great extent the truth of the allness of divine Love. But the revelation of Christian Science that God is infinite Love, infinite good, and that evil is unreal, is being accepted by an ever increasing number; and exactly in the degree that the truth about divine Love is apprehended by them, and evil recognized as unreal, their love to God increases and they become more kindly affectioned to their fellow-men. 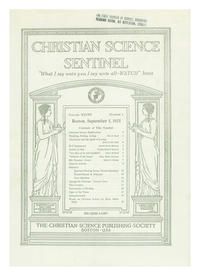