Wealth—using the term as relating to material possessions—is one of the things mankind has continually sought to have more equally distributed. In an effort to bring about financial equality, new laws are constantly being enacted, new methods of taxation tried, and sometimes even new forms of government are set up. Looking back over the history of the world, however, one finds that extremes of poverty and wealth have continued to exist; and that this condition, following civilization, is confined to no place, time, or form of government. Even under the highest forms of democracy, which aims to provide equal opportunity for all and unmistakably lessens class distinction, there still remain those who suffer from want and others who are surfeited with wealth. Health also seems to be a blessing most unequally shared, some being strong and robust, while others are weak and infirm. To correct this condition physicians study diseases and their causes, and seek to have enacted such legislation as, in their opinion, will lesson the liability of disease, and raise the standard of health. As yet, however, health seems far from being equally distributed.

Glancing over humanity's fruitless struggle to bring about greater financial, physical, political, and social equality, feeling keenly the sting of injustice that seems to dominate in the affairs of mankind, one is finally led to ask, What is the object in this inequality and partiality? Why are some favored with great riches, some with exhaustive knowledge, some with good health, some with a large measure of popularity, a few enjoying several of these blessings while others are deprived of them all? Is God responsible for this condition? 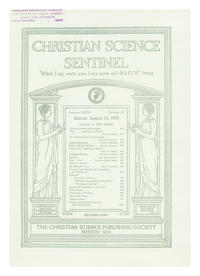