Through the first twenty-four chapters of the book of Proverbs there echoes and reechoes a single theme,—the beauty of true wisdom. By means of a variously developed symbolism, the writer emphasizes the fact that there is a wisdom which is the revelation of God. "Her ways are ways of pleasantness, and all her paths are peace," he says of this wisdom. He also exposes the seeming existence of false knowledge, and contrasts it and its effects with the true. He says, "There is a way which seemeth right unto a man, but the end thereof are the ways of death."

It has been more or less clear to thoughtful observers of humanity of all times and of all countries that harmony is consequent upon obedience to divine will, while yielding to self-will results in disaster. The Greek writers of tragedy, observing that certain types of action inevitably end in suffering and death, presented such action and its results to their audiences with the purpose that reasonable persons, persons of moral sensibility, might thereby be instructed, and so be spared the bitterness accruing from indulgence in false activity or sin. Daudet gives us the powerful fable of Blanquette, the headstrong little white goat of Monsieur Seguin, who, though seven of her predecessors in a desire for false freedom had run away to the mountains and been devoured by the wolf, yet could not be content until she had followed their example. 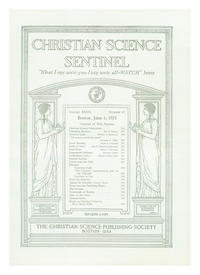