When down in the very depths of the slough of despond,...

When down in the very depths of the slough of despond, I took the advice of a friend and decided to try Christian Science. My prejudices were strong against Mrs. Eddy, but I had made the statement, "I will try anything rather than go to the hospital for another operation;" so when my friend said, "Then, why not try Christian Science?" I said, "I will." I had been through three operations, and the doctors declared a fourth was necessary. Never since childhood had I known what it felt like to be free from aches and pains. For twentyfive years of my married life I had been thin almost to emaciation, and a constant sufferer from constipation, headaches, internal troubles, self-consciousness, and melancholia. My memory seemed failing me completely, and at times incipient insanity seemed to overtake me. My husband's financial condition, always unsettled, became desperate. He seemed hopelessly in debt, and I knew it was only a question of time until his business would be sold out.

Seeing no way out of our troubles, and having no hope of gaining health for myself,—for I had lost all confidence in medicine and doctors and churches,—I was in the depths of despair and longed to die. I had been raised a devout Methodist, and honestly tried my best to be a consistent Christian after the manner of our ideals. But there came a time when I said: "It is no use. God does not answer my prayers. Doctors do not heal me. Nothing helps me. I try and try and always fail. They would all be better off without me." So with only the faith of a drowning man catching at a straw, I dragged myself to the office of a Christian Science practitioner and told my tale of woe. Patiently and sweetly she lifted my thought, and gradually my physical troubles disappeared without my going to the hospital for that fourth operation. Then out of sheer gratitude I began reading the book, "Science and Health with Key to the Scriptures" by Mary Baker Eddy. It seemed only a conglomeration of words at first; but now and then light broke in on some particular sentence, and I peresevered out of pure gratitude for my new-found health. Quite unexpectedly the Bible began to be precious to me. Passages I had read and repeated all my life took on a new meaning, giving me comfort and strength. Through the new understanding of the passage, "I can do all things through Christ which strengtheneth me," I was able to rise from bed during a severe attack of sciatica and keep an engagement.

Send a comment to the editors
NEXT IN THIS ISSUE
Testimony of Healing
In my great wish to testify regarding the benefits received... 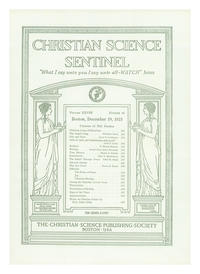