Portions of the article captioned "May Anniversaries," in...

J. Latimer Davis, Committee on Publication for the State of Iowa,—Greene

Portions of the article captioned "May Anniversaries," in a recent issue of your publication, were apparently intended to apply to Christian Science and its adherents, although no direct mention of either was made. To correct very erroneous impressions of Christian Science conveyed by the article, the following statements are submitted.

Christian Scientists do not neglect the sick nor allow them to "lie and agonize until the spirit is satisfied," as was expressed in the writing referred to. The practice of Christian Science is preeminently compassionate, and does much more for those seeking its ministrations than can be measured by ordinary material standards of helpfulness, as is indicated by the following quotation from page 367 of "Science and Health with Key to the Scriptures" by Mary Baker Eddy: "The tender word and Christian encouragement of an invalid, pitiful patience with his fears and the removal of them, are better than hecatombs of gushing theories, stereotyped borrowed speeches, and the doling of arguments, which are but so many parodies on legitimate Christian Science, aflame with divine Love."

Send a comment to the editors
NEXT IN THIS ISSUE
Article
Christian Scientists agree fully with the writer of "Health Talks"... 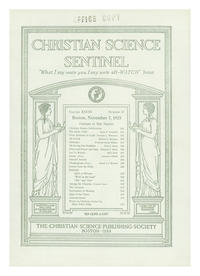