World prohibitionists and the supporters of the Eighteenth...

S. Britton R. Foster, Committee on Publication for the Province of Ontario,—Grimsby

World prohibitionists and the supporters of the Eighteenth Amendment to the Constitution of the United States consider The Christian Science Monitor their chief champion among the largest daily newspapers. The Monitor reported in a news item of October 18 the fact that with the repeal of the Millar-Gage Act in the New York State Assembly the bootleggers were becoming bolder in breaking the national law by selling drinks openly, due to the lack of state enforcement. This bolder and more open defiance of the law soon "seeks cover" from a more vigorous federal enforcement. The Monitor in the same issue, in an editorial, corrected Sir Aftred Mond for observing in an interview in England that "prohibition in New York is practically nonexistent." It remarked that Sir Alfred "might be successfully challenged to walk the length of Fifth Avenue and Broadway and (without aid) discover a single place in which he could get an alcoholic drink."

The editor of the National Observer writes in a recent issue: "The editor of the National Observer is not a Christian Scientist but believes that The Christian Science Monitor can easily qualify as the most relible and high class daily publication printed anywhere in the world to-day. The regular reading of it will keep one well informed on current events and will of itself provide him with quite a general and liberal education. There is no substitute at the present time that can come anywhere near it." 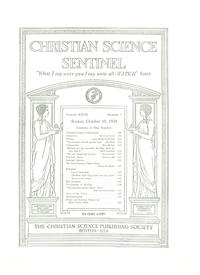