In the second paragraph of the chapter on Atonement and Eucharist in the Christian Science textbook, "Science and Health with Key to the Scriptures" (p. 18), our Leader, Mrs. Eddy, points out and emphasizes an important departure from old doctrinal landmarks, namely, that "the atonement of Christ reconciles man to God, not God to man." Christ Jesus recognized the importance of this complete reversal of prevalent thought; and he insisted upon the recognition of this by his students, or disciples. In refusing to accept a concept of God which included any compromise with materiality, he was in opposition to the entire weight of mortal opinion, and to the deep-lying inclinations of that humanity of which he himself, in some degree, partook. Nothing but divine inspiration could have enabled him to keep ever in his own vision, and to urge by precept and example upon his followers, this exalted and imperative ideal. And nothing but his unselfed, radiant reflection of Truth could have so endowed him with divine power that the sick and the sinning thronged and followed him, joyfully surrendering their burdens of self at his behest.

Early in the history of Christianity, however, the exalted concept inculcated by the Master was relaxed, with gradual disappearance of the "signs following;" so that by the fourth century of the new era the general worship was directed towards an anthropomorphic Deity, who became outlined in mortal thought, and was believed to accept good intentions, formal worship, and superstitious ritualism in lieu of loving obedience to the law of Love. Materialism reared its false gods before eyes which "could ... not watch ... one hour;" and self-will, relinquishing the invisible crown, chose rather to eat and be well filled with its own desires. 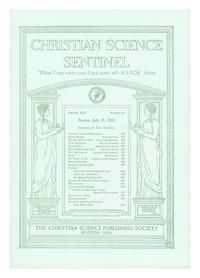