An Episcopal layman recently declared in the World-Herald...

An Episcopal layman recently declared in the World-Herald that the Nicene creed is practically the constitution of orthodox Christianity, and finding that Christian Science does not accept the theory that Christ is God, stated in that creed, he jumped to the conclusion that Christian Science has no Christian basis. If both his premises were admitted, Christian Science would still have for its foundation, as actually it does have, the whole of the sacred Scriptures, the Holy Bible, for the Nicene creed is not a part of the Bible, and discussion of the relationship of that creed to Bible teaching has continued without conclusion for fifteen centuries with a vigor and persistence that no other subject has exceeded.

It may well be that the statement is correct that the Nicene creed is the constitution of various religious doctrines, but creed or belief cannot be the basis of scientific teaching, for that must rest upon absolute law. Christian Science is truly scientific and is based upon the spiritual law stated in the Bible and fully demonstrated by Christ Jesus. This law declares the infinitude and goodness of God, and the Savior showed that this law must be understood and applied, thus destroying all manner of evil, including sickness. The science of Christianity operates according to that law, overcoming sin, disease, and all evil in proof of God's allness.

Send a comment to the editors
NEXT IN THIS ISSUE
Article
The rabbi's sermon, "The Problems of Evil," extracts of... 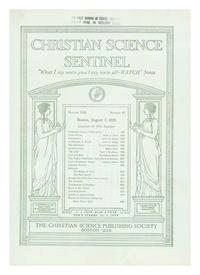