Christian Science while upholding honest and representative government, guides its student to a more spiritual conception and idea. Christian Science teaches that man is governed by divine Principle, God, and that he is only rightly governed when governed by divine Principle. It is impossible for man to be governed and controlled by both God and man in Science. The greatest evil in human government is the temptation to control. Control indicates power, earthly power and domination, and is the source of most of the world's troubles, including war. In Christian Science a man is not a ruler, does not control, does not trespass on the rights of others, does not force matters to a conclusion, does not seek to dominate or govern, because this is impossible where God, divine Principle, is the only power. 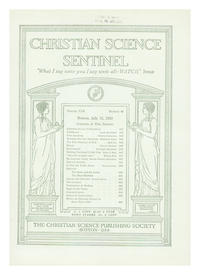