IN an advanced class in a Christian Science Sunday school, a pupil asked the teacher what would become of mortal mind when no one any longer believed in it, and the teacher replied that it would always be just what it is now—nothing. Then the teacher asked what became of their belief in Santa Claus when they awakened to the fact that they had only been believing in a myth. Had not their childish fancy been carried away by the vision of a fat, jolly old man, who on Christmas Eve, while they slept, came down the chimney and filled their stockings with good things, which on Christmas morning seemed proof of his visit? As they outgrew this myth, however, what became of their belief? And after the truth became clear to them did there not cease to be even an illusion?

Shortly after this the teacher had a seemingly difficult problem to solve, and in her work this illustration of the mythical nature of a false belief continually recurred to her, until she asked herself just how much of this she was proving, and whether she was actually demonstrating that statement by Mrs. Eddy in "Unity of Good" (p. 9), "By knowing the unreality of disease, sin, and death, you demonstrate the allness of God." With this there came the message to rise to the altitude of thought where there ceased to be an illusion. The argument that the dream was terrifying could not make it any more real in view of the allness of Love. Mortal mind would keep its victim a prisoner even though the door is wide open. Let us stop our fluttering and being "carried about with every wind of doctrine," and calm our thought sufficiently to see the open door and our freedom near at hand. 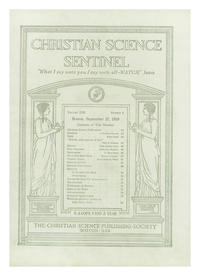