If there is one thing that exasperates the human mind it...

If there is one thing that exasperates the human mind it is to have challenged its belief in the reality of that which causes it the most trouble. Most people will admit that belief in the reality of matter lies at the root of all poverty, sin, disease, and death; yet when this reality is challenged, and challenged on the basis of the Scriptural teaching of the omnipresence of God, Spirit, the world, and especially the theological world, protests as though its most cherished possession was in jeopardy.

The avalanche of criticism of Christian Science launched by a clergyman, and recorded in the Index, concerns itself largely with the repudiation of Mrs. Eddy's teaching regarding the unreality of matter. And yet it must be apparent to anyone who will give the subject logical consideration that the teaching of the Scriptures that God, Spirit, is omnipresent—ever present and everywhere present—must exclude the existence of matter as a fact. Like produces like; hence the logic of Mrs. Eddy's contention, "Man is not material; he is spiritual" (Science and Health, p. 468). One of the great services Mrs. Eddy has rendered humanity has been to direct attention to the record of spiritual creation in the first chapter of Genesis, a record into which matter does not enter, and in which man is declared to be the image and likeness of God, of Spirit.

Send a comment to the editors
NEXT IN THIS ISSUE
Article
In reply to all the clergyman's contentions as to the... 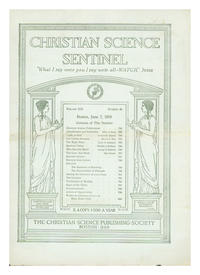