In the sixteenth chapter of Mark we find the words, "Go ye into all the world, and preach the gospel to every creature." These words were addressed by Jesus to his disciples, who, it is noteworthy, were not urged or besought to do this, but commanded; it was a solemn duty to be performed, no choice being left to them if they were to be true disciples. Recognizing the God-given authority for the command, the disciples unquestioningly obeyed. It is then no cause for wonder that such preaching was always accompanied by the healing of the multitudes who heard it, of all their infirmities, want, and woe. Later the demonstration of Truth's power was lost sight of, the letter was preached without the spirit of this command being obeyed, and it remained thus until the Christ-healing was restored through the discovery of Christian Science by Mrs. Eddy.

Christian Science is to-day the gospel, in scientific form, that was preached by Jesus' disciples; and Christian Scientists are accordingly subject to the same command to preach the gospel, with "signs following;" they are messengers of Truth, or bearers of glad tidings. The glad tidings, the message of Truth to this age, is to be found in the inspired writings of our revered Leader, and in the periodical literature established by her. One of the ways and means of carrying this message to a sense weary and peace seeking world is through the distribution of the authorized Christian Science publications. That this literature has reached countless numbers of suffering human beings to whom it has brought better conditions in every conceivable way, must be admitted. 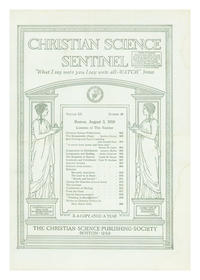