Universal brotherhood based on spiritual understanding is fundamentally one of the teachings of Jesus, echoing as it does the prophet's cry, "Ho, every one that thirsteth, come ye to the waters," for none are excluded from this spiritual drink. The Master classified as his brethren and sisters and mother all who did the will of his Father—lived the Christ-life. We read in the gospels that Jesus at one time withheld his doctrine from certain ones, having instructed his disciples to "go not into the way of the Gentiles;" also saying, "Into any city of the Samaritans enter ye not." This was no doubt because his disciples did not then possess the understanding needed to overcome their own prejudices as well as those of other nationalities. We must also remember that these classes of people represented the pagan, unprepared thought, that swinish phase of the carnal mind which, because of its hatred of the truth, turns and rends the distributer of the priceless pearls of spiritual wisdom.

May not admonition of the Master have betokened a tender care on his part for his beloved disciples, that they might be protected from going among those who would thus rudely despoil them of their spiritual treasures? He told them to "go rather to the lost sheep of the house of Israel," those dissatisfied with an unspiritual, ritualistic religion, who had wandered in thought from the fold, and who therefore were ready meekly and joyfully to accept the simple teachings of the Christ. His advice to his disciples, moreover, warned them of the danger of attempting more than they could demonstrate. 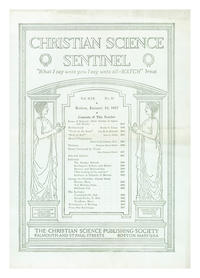