IT was not until the writer became interested in Christian Science that he learned the real meaning of the word righteousness, which is derived from the Anglo-Saxon word rihtwis, right-wise. We find, therefore, that righteousness is simply right-wiseness, or right wisdom. The recognition of this leads the thinker naturally to inquire, What then is the so-called wisdom which is not right and which must therefore be dethroned from consciousness?

There are many passages in the Bible which, in the light of Christian Science, answer this question. In Isaiah we read, "Woe unto them that are wise in their own eyes, and prudent in their own sight !" and in his first epistle to the Corinthians St. Paul puts it perhaps still more plainly when he says that "the wisdom of this world [knowledge gained from the evidence of the material senses] is foolishness with God." On page 275 of Science and Health Mrs. Eddy says: "All substance, intelligence, wisdom, being, immortality, cause, and effect belong to God. ... No wisdom is wise but His wisdom." We thus find that righteousness is something far beyond any material sense of goodness, for to be truly right-wise we must reject entirely all so-called wisdom gained from the standpoint of belief in matter, and reflect only that wisdom which is revealed through spiritual understanding,—the wisdom which is of God, the one and only Mind. 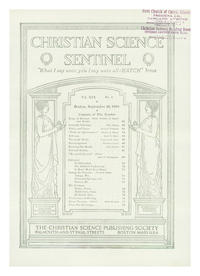