"He that is greatest"

The deep, almost unspeakable teachings of our Master could not well have found utterance in the vocabulary of the learned doctors of early Christian times. It would be hard to imagine what the Sermon on the Mount would have been like if put forth according to the ritualistic oratory of Cæsar's court executors. It is a matter of great moment that the simplest concepts since history began have endured the longest. With the patience, yea, the fortitude of one sent from God, Jesus spoke in words so simple that they instantly moved the mighty either to mortal discomfort or open combat.

To that momentous question of Jesus' disciples, "Who is the greatest in the kingdom of heaven?" his reply came with a readiness that caused his hearers to marvel. Beckoning a little child to him he said, "Except ye be converted, and become as little children, ye shall not enter into the kingdom of heaven." As much as to say, "Getting into heaven at all depends upon a sense of humility and sinlessness equal to that of a babe, let alone the matter of being 'greatest'." His avowal, however, needed a further context. Even while his words were burning in their ears, and as if to give emphasis to his meaning, he said, "Whosoever therefore shall humble himself as this little child, the same is greatest in the kingdom of heaven,"—an attainment far removed from the pride of worldly power or doctrinal contests. 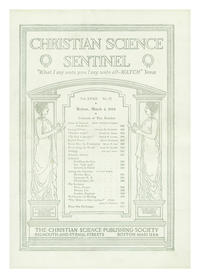