The simple story of the woman who came unbidden to the house of Simon the Pharisee, and her self-forgetful tribute to the Master as he "sat at meat" amid the luxurious surroundings of Simon's dwelling, brings the inspiration of love, humility, and gratitude. The incident is rich in symbolism, and full of gentle admonition to the Christian Scientist, while the lesson conveyed is fraught with even sweeter meaning when considered in connection with the beatitudes. Viewed in this light the Oriental scene is tinted with a glow of sacred beauty.

The profound metaphysical truths set forth by Christ Jesus in the beatitudes were remarkably exemplified by this woman in her mental awakening to a spiritual sense of life as portrayed in the Bible narrative. She had been a woman of the city, a sinner, according to Luke. Perhaps she had seen the Nazarene as he went about doing good, and had heard the heavenly words that fell from his lips. We can almost hear her saying, "The sight of thee unveiled my sins, and turned my misnamed joys to sorrow" (Miscellaneous Writings, p. 326). Heart-weary and sin-stained, she had perceived that the pleasures of the flesh are but bubbles upon the stream of mortal experience. In trembling shame she felt the spiritual poverty of her barren life, and became receptive to the glorified sense of spiritual being, and this mental state illustrates the first beatitude. 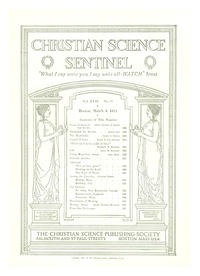