The Scriptural statement that God is "of purer eyes than to behold evil," is regarded in Christian Science as fundamental truth. This proposition, that God does not know evil, being accepted by the student, gives rise to various questions which must be taken up one by one and their answers sought and found, for thought must be established on a firm basis, not only of knowing but of knowing why we know. One question, which is of such vital importance that it is asked by most of those who are seeking an understanding of God as infinite good, is this: If God knows not evil, how could He know the need of mortals, and so send Jesus to meet that need?

The writer, in her intense desire to have her topsy-turvy concepts of God and man righted, sought eagerly an answer to this question for many weary days, until it seemed that not another step along that pathway could be taken until the problem there presented should be solved. Then came an hour of trial,—apparently a great injustice had been done; those near and dear had betrayed and wronged, and anger, revenge, self-pity, and all the cruel horde, beat at the door of consciousness, clamoring for admission. 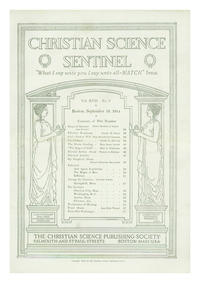