Logic is not, I am afraid, Mr.—'s strong point, and he illustrates this very completely in his—shall we call it—argument about the woman in the apocalypse. Mrs. Eddy, he explains, teaches that woman symbolizes generic man. Then he adds the playful comment, "Woman means man, man means God, black means white." Now, is it possible that this critic, in all that vast "erudition" which flies from the soldier at Waterloo to the schoolmaster of Auburn, and from the derivation of science from scio to the early church quarrels over a diphthong, has never known the word generic or man to be used to cover both sexes. Let me hasten to assure him the usage is quite common from the time of the Latin poets, and can even, in his own phrases, "be supported from Congregational, Baptist, and most hymnals." When he goes on to explain my ignorance over the words holy and wholly, and to explain that one is no more archaic than the other, his erudition becomes a little tiresome. The dictionary which revealed to him the fact that science is derived from scio, would, if he had pursued his researches, have revealed the further fact that the connection between the two words is more than what he means by alliterations.

Send a comment to the editors
NEXT IN THIS ISSUE
Article
In a recent issue Dr.—has referred to a man who called... 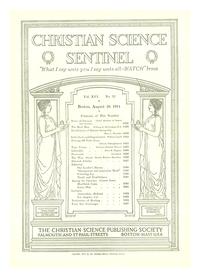