To the thoughtful student of Christian Science it is undeniable that Mrs. Eddy selected her words with definite design, and that due attention to her admonitions will obviate incorrect or strained construction thereof. Vexed questions are to be explained by Mrs. Eddy's own words, rather than by any private interpretation.

Occasionally a student of the Christian Science text-book, "Science and Health with Key to the Scriptures," is honestly blinded by a too circumscribed reading of the statements by which he is endeavoring to be guided. To such we may be privileged to enact the rôle of Aquila and Priscilla with regard to Apollos, to whom they expounded "the way of God more perfectly," thus confirming faith by clearer perception of divine law. There are, however, some who seem unable to discriminate between negative permission and positive authority, and who thereby repeatedly make the good of our cause to be "evil spoken of." These may presume to translate the meanings of Mrs. Eddy's most profound sentences at sight, and awe the timid questioner into enforced and unillumined silence by an aggressive manner or a bold assumption of authority. They are wont to say that Mrs. Eddy makes no hard and fast rules; that everything is left to individual demonstration. 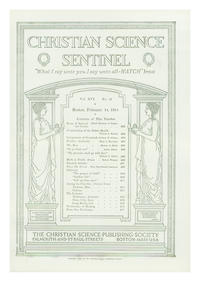