A Parable of Nature

Nature speaks to us in parables, and one of the great lessons it would teach us is that she does not effect sudden transformations. If you take a fish out of water and throw it on the beach, it will live but a moment. It is possible, however, for a fish to live for a long time out of water. There is a fish called the bommi, or mud-skipper, found on the west coast of Africa, which seems to prefer to live out of water, and which spends nearly all its time on the sunny banks of sand or mud, or on the branches of the mangrove trees which grow in those parts. Now this fish did not learn the art of breathing the air in a day; it meant years of patient struggle by its ancestors before this capacity was acquired. It may have made the attempt many times, only to find it impossible; but it did not give up, and after many efforts and much struggling it found that it could remain out of water for a little time, and then a little longer, until at last its endeavor was rewarded and it became master of the situation.

What has happened? Simply this: The fish was impelled to try to live in a new world, and made the effort to do so. Just so, whenever there is this combination of desire and effort, the end sought is sure to be attained. It would have been impossible for the fish to live in the sunshine had it remained in the water and made no effort to come out. It has gained this new life in the only possible way, namely, by abiding in the environment of its choice in spite of the opposition with which it had to contend in the first instance. By so doing it received the gift of the environment in the shape of new organs, —lungs to breathe the air and eyes to see the beauties of its new surroundings. When men rise out of the material and seek the spiritual, as revealed through Christian Science, their former friends will doubtless think that they are leaving their natural and God-provided environment; but this is not so, for as St. Paul declared, it is in God, Spirit, that "we live, and move, and have our being." 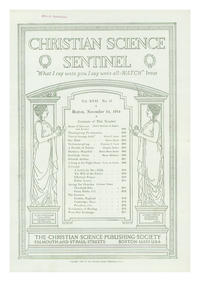