Every loyal student of Christian Science is called on to ponder carefully and prayerfully the first five verses of the seventh chapter of Matthew. Beginning with "Judge not, that ye be not judged," these verses lay down a rule which is absolutely indispensable in the solution of human problems, a rule which must be honestly and sincerely obeyed, not occasionally, but all the time, if men and women would come to know and reflect true harmony, happiness, and freedom. The habit of judging (and the word judging is here used in its popular sense of forming unfavorable opinions about, of criticizing or censuring, either persons themselves or things in direct connection with persons) is one which should be seen for what it is, and should be broken. It is a habit which, probably more than any other, leads one away from God, good, and so keeps one from seeing man and the universe as the image and handiwork of God, sustained, perserved, and governed by Him. Of course, the whole difficulty lies in following the dictates of so-called mortal mind, and in judging "according to the appearance," according to the material seeming, and not according to the spiritual reality.

This fact was most strongly emphasized when, as Christ Jesus was teaching in the temple, the "scribes and Pharisees brought unto him a woman taken in adultery," which was to them an unpardonable offense. Considering only the error into which the woman had unfortunately drifted, beholding her only as a fallen, despicable creature of the flesh, entirely divorced from divine Spirit and its holy, transforming power, her self-righteous accusers and tormentors, in their usual tempting way, insisted that the Master should give permission to have her stoned, in keeping with the stern religious law of the day. But what was the Master's attitude? Did he give the desired permission? No. Instead, he drove the lesson straight home by declaring in words that at once convicted each accuser and tormentor himself, "He that is without sin among you, let him first cast a stone at her." Then, turning to the one seemingly in error, but absolutely refusing to know man save as the spiritual, perfect child of God, separate and apart from so-called evil and its effects, matter and its laws, the Master did not spurn or condemn the woman, but gently enjoined, "Go, and sin no more." 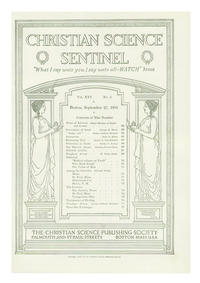