Although my first knowledge of Christian Science came...

Although my first knowledge of Christian Science came through a wonderful healing some years ago, I have never written of it for publication. At the time this truth was presented to me through a friend, my case had just been pronounced hopeless by a noted nerve specialist, and my family had been told that I could live only a little while longer. I had been ill for years, and at that time was almost entirely helpless from a complication of many troubles, some of them said to be nervous and functional and some organic in origin. Several operations were said to be necessary before I could possibly recover, but I was far too weak to undergo them. I was also suffering intense pain all the time, which had spread to every part of my body. I had been on crutches for six months, and had finally been obliged to abandon them for an invalid chair, in which I was wheeled about. The only relief I could get at night was when under the influence of quieting medicines. All possible methods of medicine and manipulation had been tried, with absolutely no benefit, as I was rapidly growing worse.

I was quite willing to try Christian Science treatment, though I had little or no faith in it. I was perfectly indifferent to everything, but I told the practitioner who was called that I did not see how I could endure the night without some opiate. "Would you be willing," she said, "to wait till midnight before you take a dose?" I said, "Certainly," and she replied that she was sure I would not need it by that time. I was truly never so surprised in my life as when I awoke about seven o'clock the next morning and realized that I had been peacefully unconscious in restful sleep ever since eight o'clock the evening before, the first full night's rest I had known for years! And words cannot express my joy when I also realized that the pain was partially gone. Faith immediately awoke, and my recovery was rapid. In three days I could walk about the house, and in a week I walked to and from the street-car a block away. In a few weeks I was completely restored to health, and to such exuberant strength as I had never before enjoyed. All my old chronic troubles disappeared at once.

Send a comment to the editors
NEXT IN THIS ISSUE
Testimony of Healing
I first heard of Christian Science about three years ago,... 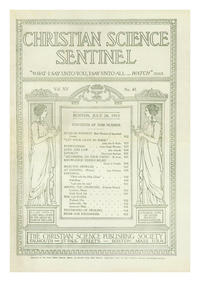