I feel that the time has come for me to give utterance,...

I feel that the time has come for me to give utterance, through the columns of the Sentinel, to what Christian Science has done for me and my family, hoping that the seed will not be sown in vain. When through a dear friend who had been healed in Science the truth was presented to me six years ago, it found me both mentally and physically ill. I was willing to investigate it, thinking that in this there might be a ray of hope for me. Soon after beginning the careful reading of the Christian Science text-book, "Science and Health with Key to the Scriptures" by Mrs. Eddy, loaned to me by this same friend, the clouds were lifted in proportion as the truth of the statements contained therein dawned upon me. From time to time I asked for absent treatment for some very painful and annoying ailments, and one by one they gradually disappeared. Among these were stomach, kidney, and overian troubles, for which I had taken much medicine and been treated by doctors, but had received no benefit. I had also severe attacks of throat trouble, usually during the winter months, which confined me to the house for several days at a time; but these, too, have disappeared.

On the part of my husband, the desire for liquor and the smoking habit have yielded to the influence of Truth as revealed in Mrs. Eddy's writings, for which he feels that he owes much to Christian Science. Our children have also received much benefit from the same source. On one occasion, when my eldest son was thrown from a horse on which he was riding, and was kicked and dangerously cut on the head, I was able to overcome fear in myself by repeating and realizing the truth of these words, found on page 283 of the Christian Science text-book: "Mind is the source of all movement, and there is no inertia to retard or check its perpetual and harmonious action." I was able to cling to the truth for him, and in one hour from the time he was laid on the couch he was able to sit at the table with the family, eating his usual meal without pain or discomfort. The deep cut in his scalp soon healed without applying any material remedy.

Send a comment to the editors
NEXT IN THIS ISSUE
Testimony of Healing
Deep gratitude to God is the motive actuating me in... 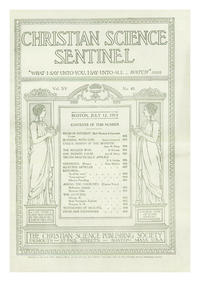