After spending an afternoon in the country a short time ago, I sat on a rustic seat by the roadside, waiting for the electric car which was to carry me to the city. It had been a warm day, but now there was a delightful coolness and freshness in the quiet air. The mountains, with a soft haze resting upon them, brought to consciousness the beautiful psalm beginning, "I will lift up mine eyes unto the hills, from whence cometh my help." The green verdure, with here and there a clump of trees, was soothing and restful. To one living in a city, nature's charms are especially alluring, and in drinking in the loveliness I kept thinking of those spiritual verities of which the apostle tells us, the things which "eye hath not seen," but which are prepared for them that love God.

After getting on the car, it soon became too dark to distinguish objects, and sitting on the front seat I had an unobstructed view of the track ahead, clear and distinct, as far as it was lighted up by our powerful light. Beyond that, everything was indistinct, and around the bend some distance ahead I could but conjecture what awaited us. A beautiful lesson was thus gained. The track could be compared to one's path through life. When lighted by spiritual understanding, one can clearly see his way, obstacles are revealed, instead of doubt there is security, and one can say with the psalmist, "Thy word is a lamp unto my feet, and a light unto my path."

Send a comment to the editors
NEXT IN THIS ISSUE
Article
In a sermon against Christian Science reported in a recent... 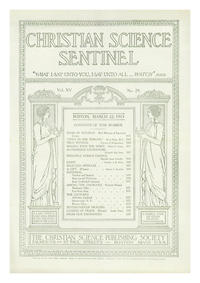