Although we do not nowadays hear so frequently as formerly the assertion that "Christian Science is neither Christian nor scientific," the belief expressed in these words still prevails in many quarters; namely, that the followers of this faith are outside the pale of evangelical Christianity. Because this belief prevails and because the word "evangelical," like many other words of doctrinal significance, has been appropriated by some sect or sects, it may be worth while to inquire into its meaning, in order that its use and significance may be properly understood. According to Webster, evangelical means first, "contained in, or relating to, the four gospels; as, the evangelical history;" and second, "belonging to, agreeable to, or contained in, the gospel, or the truth taught in the New Testament; as, evangelical religion."

From these definitions it will be readily seen that the term evangelical applies to Christian Science in the most direct way, and that so far as being evangelical is concerned, the Church of Christ, Scientist, is not only evangelical, but it might properly question the standing of some of its critics, who, in their practice at least, nullify the mighty works which Christ Jesus wrought in connection with his ministry and in logical fulfilment of his doctrines. When he sent forth the twelve disciples, he commanded them, "As ye go, preach, saying, The kingdom of heaven is at hand. Heal the sick, cleanse the lepers, raise the dead, cast out devils: freely ye have received, freely give." When he commissioned the seventy they, too, were commanded to heal the sick.

Send a comment to the editors
NEXT IN THIS ISSUE
Editorial
"OUR SUFFICIENCY IS OF GOD." 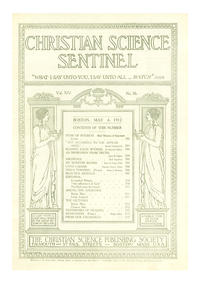