Over a year ago I received healing in Christian Science,...

Over a year ago I received healing in Christian Science, for which I am very grateful. A felon formed on my right thumb, and in two days the inflammation and pain became very great. During the third day I was away from home, and by the time I reached it at night the suffering was intense. On arriving there, I remarked to my sister that I should remain dressed so that I could walk the floor. She began at once to declare the omnipotence of divine Love, and after a few minutes I felt that it was placing no trust in God to make preparations for a bad night, and went as usual to my room The truth which had been reflected to me helped me so much that I had a quiet night.

In the morning the suffering was far less, but at night the pain again became so great that I telephoned practitioner for help. Through the telephone came back the message to go quietly to bed, knowing that divine Love would meet my need. This I did, and was rewarded, for I went to sleep immediately and knew nothing more until the morning. I have seen very speedy relief from Christian Science treatment, but up to that time had scarcely thought it possible that even Christian Science could relieve instantaneously such acute inflammation and pain as I was then enduring. It did so, however, and from then on I suffered no more pain, although the growth continued to develop and it did not discharge until two days later. I should like to state here, that after having had treatment, and while my thumb was quite enlarged, I was able to bend it and write a letter. It was a very complete proof to me that matter has really no sensation.

Send a comment to the editors
NEXT IN THIS ISSUE
Testimony of Healing
As I have been helped in many instances by Christian Science,... 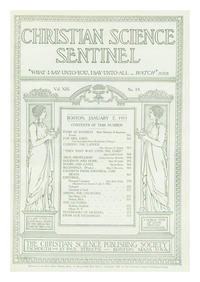