In the book of Isaiah we read: "Thou hast broken the yoke of his burden, and the staff of his shoulder, the rod of his oppressor, as in the day of Midian." This text brought home to the writer a fuller sense of the freedom which Jesus Christ gave to mankind by the triumph won in his first recorded struggle with evil, in the wilderness. The forty days of silent communion and preparation were followed by the temptation of physical weakness, in which the human sense was brought face to face with hunger,—one of the material beliefs which has bound the Adam-race with more seeming power than almost any other. Up to that time the belief had held undisputed sway over mortals that life was dependent upon material sustenance and could not exist without it.

We cannot doubt that Jesus must have realized the full significance of the problem which confronted him, and resolved to work it out in a purely spiritual way. This loyalty to the highest possible demonstration of real being enabled him to turn from the lower demonstration suggested by the physical sense of immediate need. It would perhaps have been easy for him to turn the stones into bread and thus satisfy a seemingly natural craving; but although this might have sufficed to prove the measure of his spiritual understanding to a large extent, it would not have established the true sense of being, and its absolute independence of matter, which would still remain for him to prove, and which must be proved before he could arrive at the conviction which might declare, "Destroy this temple, and in three days I will raise it up." At the outset of his public ministry, he thus showed his readiness to sacrifice to the utmost the material sense of selfhood, and the belief in material causation thereby implied, in order to prove conclusively the absolute fatherhood of Spirit—the divine Mind—as the sole cause, sustenance, and substance of man. 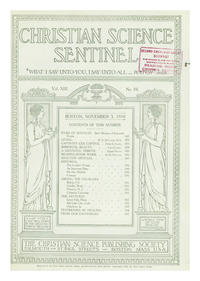