It is never possible to be perfectly sure what an individual...

It is never possible to be perfectly sure what an individual writer means by "faith-healing;" but if, as is commonly the case, the bishop meant the prayer to God to remove something He has either directly caused or indirectly permitted, then Christian Science has no affinity with it. Christian Science is based on the fact of the allness of God; that is, of good, and the insistence that nothing really exists but God and the spiritual universe. It follows from this that sorrow and sickness and sin, in a word everything that is unlike God, are unreal, inasmuch as they are inherent in a purely relative human sense, which actually is ignorance of God. The prayer, then, which will destroy this is a realization of Jesus' words that our Father has already given us all that we require, and the corresponding effort to demonstrate this by gaining a more scientific knowledge of God, and consequently of the truth which Jesus said would make men free.

Such a knowledge is as far removed from mental suggestion as anything well could be. Mental suggestion is the claim that one human mind can control another, and as no one has ever dared to pretend that the human mind is entirely good, it is manifest that such a theory leaves one human being at the mercy of another for whatever that other may define as good or evil. Now Jesus said, "A good tree cannot bring forth evil fruit, neither can a corrupt tree bring forth good fruit." It consequently follows that the fruit of a mind capable of thinking good and evil cannot be good. It is, in the plain words of the Jehovistic document of Genesis, the fruit of the tree of the knowledge of good and evil, the eating of which is described as producing death. It is equally manifest that healing cannot be effected through such a means. Jesus brushed the whole idea aside, from a Christian point of view, when he said, "Every kingdom divided against itself is brought to desolation," for the claim of the human mind to the power to suggest health and sickness is just such a kingdom. "But," he went on, "if I cast out devils by the Spirit of God, then the kingdom of God is come unto you." The kingdom of God, and with it the peace of God, never came to any man by mental suggestion, and it never will. It is here that the difference between Christian Science treatment and any other mental treatment becomes a great gulf fixed; and the fact emerges that instead of producing tragic effects Christian Science has healed unnumbered cases not only of functional but of organic disease, and is destroying by precisely the same means sorrow and want and despair and malice and sin for did not Jesus declare, "Whether is easier, to say, Thy sins be forgiven thee; or to say, Arise, and walk"?

Send a comment to the editors
NEXT IN THIS ISSUE
Article
Mr. Chesterton is quoted by our critic as saying: "To... 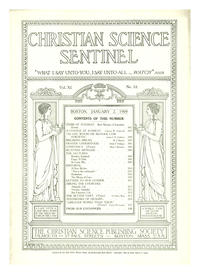