In a recent issue an excerpt from an article by Prof. Hugo Munsterberg...

In a recent issue an excerpt from an article by Prof. Hugo Munsterberg, under the caption, "Hypnotism not a Cure-all," states: "The small good which faith-curers and mental healers and Christian Scientists may have done is heavily outweighed in the criminal wrong they did in stirring up the prejudices of the masses against the scientific work of physicians. Suggestive therapeutics can ask for a hearing only after the scientific physician has made a diagnosis, and has made reasonably sure that no lesion of a vital organ demands very different treatment."

The writer of the above-mentioned article is evidently laboring under somewhat of a misapprehension as concerns the methods and work of Christian Scientists. It must be patent to all thinking people that every movement touching the welfare of humanity must stand or fall absolutely upon the basis of its merits or demerits. This applies to what is termed "the science of medicine" and to Christian Science. Christian Science is now recognized as an established religious faith, because it has been proved to be an important factor in the healing of the sick, the overcoming of the many discordant conditions incidental to humanity, and in the regeneration and reformation of the sinner. Christian Scientists do not decry the work of physicians or their attempts to alleviate suffering. They recognize and appreciate the honesty and integrity of the better class of physicians, and respect their endeavors; therefore they make no attempt to "stir up prejudice" against the work of said physicians. At the same time, they insist upon their individual rights to employ such means as have been proved to them to be most efficacious.

Send a comment to the editors
NEXT IN THIS ISSUE
Article
It is often thought by those who do not understand the... 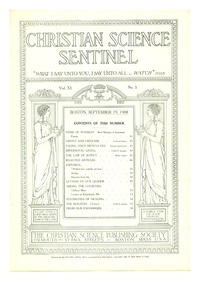