THE NEED OF MENTAL ACTIVITY

The need of greater mental and spiritual activity along all lines of Christian endeavor is one that should appeal to all thinking persons. The advancing religious thought of the twentieth century is penetrating the secret chambers of evil, thereby arousing the carnal or sensual thought that would declare itself good and demand human recognition and obedience. The result is an unusual activity on the part of evil in its futile attempt to hold its own. To meet these subtle arguments of evil and to blot them out of individual consciousness is the problem confronting every one who names the name of Christ in Christian Science, even while the would-be critics to this Science are declaring that Christian Science advocates the covering up and ignoring of evil.

If evil could be ignored, there would be nothing left for mortals to do in this present world. The only possible way to reach the kingdom of heaven here or hereafter is for us to overcome all belief in evil, and this cannot be done by sitting still and ignoring error's false claims or arguments that are continually being encountered in the mental realm. The true disciple knows only too well that there is a cross to be carried, and that this means greater mental activity on his part. It never means mental stagnation, apathy, or indifference. It means alertness, watchfulness, and earnest striving to express the Mind of Christ and to put off the so-called mind of mortals, which ever argues for the reality of all that is unlike God. Simply saying that one is not afraid of it, is not sufficient. It requires spiritual discernment and understanding to reduce error to its native nothingness. It requires the declaration and application of right thought to clear the mental vision and to reveal the supremacy and allness of good. Clinging to the belief of two contending powers, good and evil, will not do the work; but knowing the truth about God, that omnipotent good is all power, will destroy any and all suggestions of a suppositional opposite power. 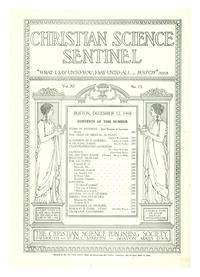