THE REWARD OF CHARITY

Over the desk of a Christian Science practitioner in one of our large cities appears this precept : "Never judge or condemn any one; but watch also that you do not chide others for doing so. Let others do as they please. Show them an example by your own life." It has been demonstrated time and again that the one who is chary in his criticism of his fellows, enjoys to an unusual degree the esteem of his acquaintances, and is generally pointed out as a model. I have a friend who is not a Christian Scientist, but whenever another's conduct is up for discussion, he always has something good to say. No matter how serious may have been the lapse from ethical standards of the person under discussion, this friend always pleads the possibility of extreme provocation, or the existence of mental phases the critics know nothing about, as a mitigation of the seeming dereliction, and ends by saying, "Now you know so and so"—narrating something good he knows about the other. This friend is universally beloved and trusted, simply because of his charity, and though it has been his lot to experience considerable misfortune, he has maintained a uniform attitude of hopefulness.

It is a strange perversion of human nature, however, to rest content in mere admiration of the estimable traits another may possess, and, even though admitting that happiness to oneself follows their practice, never attempting to do likewise. This is because it is generally believed that such traits are inherently natural, and not to be attained through voluntary effort, unless one should exercise years of tremendous self-restraint. Accordingly there is apt to be more striving for material possessions than for the moral improvement of oneself, but despite this common opinion to the contrary, the returns from a sincere effort to be charitable in thought and act are sure to be immediate and unexpectedly uplifting. Let any one honestly strive to live up to the teaching of Christian Science with respect to the judging of others, and at once he will perceive a real transformation going on his nature. Soon after he has suppressed his first impulse to speak ill of another, he will be conscious of a sense of healthy gratification, and if he continues in his endeavor, this will grow till he finds a real joy in seeing the good, rather than the evil, in his fellows.

Send a comment to the editors
NEXT IN THIS ISSUE
Article
IS THE CHRIST-HEALING INSTANTANEOUS? 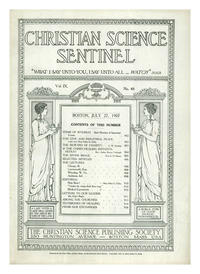