On the whole that broadside of views in last week's...

On the whole that broadside of views in last week's Zion's Herald with regard to Christian Science was perhaps more favorable to the cult than the editor anticipated it would be when he asked a number of ministers to respond to this query: "Is there anything in Christian Science which Christian ministers should recognize and utilize?" Of the eighteen or twenty who reply, all reiterate their conviction of the falseness of the underlying philosophy and several condemn the movement and its adherents in strong language. On the other hand, a number see in the uniform cheerfulness, optimism, and apparent serenity of Christian Scientists an example which ought to be generally followed. Dr. Butters of Newton says: Christian ministers can learn from Christian Science that the rank and file of the people want the optimistic spirit in teaching and life." Dr. Bates of East Boston admires the beauty and consistency of the lives of many Scientists. Dr. Pickles of the Massachusetts Sunday School Society commends their insistence on the supremacy of the spiritual, while several other writers express the wish that Christians would study the Bible as faithfully as Scientists do their text-book. One of the most significant replies is from Rev. E. J. Helms, pastor of Morgan Memorial Chapel on Shawmut Avenue, who quotes John Wesley as saying,—

"All violent and sudden passions dispose to, or actually throw people into, acute diseases. The slow and lasting passions, such as grief and hopeless love, bring on chronic diseases. Till the passion which caused the disease is calmed, medicine is applied in vain. The love of God, as it is the sovereign remedy of all miseries, so in particular it effectually prevents all the bodily disorders that passions introduce, by keeping the passions themselves within due bounds. And by the unspeakable joy, and perfect calm, serenity and tranquillity it gives the mind, it becomes the most powerful of all the means of health and long life."

Send a comment to the editors
NEXT IN THIS ISSUE
Article
The natural sciences are built upon theories which... 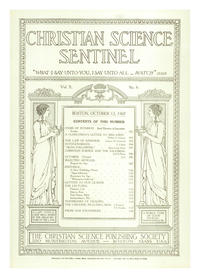