THE LESSON OF CHRISTIAN SCIENCE

The lesson of Christian Science, illustrated throughout its practice in the healing of sin, disease, poverty, and sorrow, is that the benign power of Christianity blesses mankind only in the measure of its application; that its redemptive truth must be utilized in the destruction of evil, after our Master's example, in order to realize its efficacy. The purchasing power of money is made evident in its actual use, not in its idle accumulation in the bank. A reservoir of water, though in close proximity to a city, would not benefit the inhabitants unless its contents were applied to their need. What should we think if such people continued to suffer of thirst, seeking meanwhile in all other conceivable directions for relief, and yet made no effort to use the water right at their hand? What possible good to a thirsty man is his belief about water if he does not drink of it?

Christianity is the great reservoir of "the water of Life," established for mortals' use by Christ Jesus, given them of God for the healing of their distresses and their salvation from sin, but a false concept of the Messiah and his teachings has prevented them from using it as he intended. The popular belief that the sufferings of the flesh must be endured except for such relief as may be found elsewhere than in Christianity, is not more rational than would be the assertion that thirst must be endured except for such relief as may be procured apart from water. Water has the same beneficent properties that it had six thousand years ago; and so has the truth of God's infinite Love and goodness; the requirement in both cases to realize their blessing is application, without which either is useless to him who needs it. The whole human race is groaning in unspeakable bondage to evil and suffering, while the emancipating truth waits unheeded and unused at their hand,—the truth which Jesus labored with unparalleled love to bring to them. Is it any wonder that he wept over the rejection of his message, saying, "Ye will not come to me, that ye might have life." 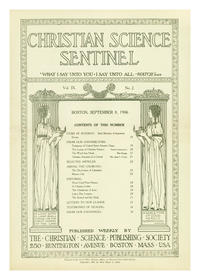