The Rt. Rev. Charles Gore, D.D., D.C.L., Lord Bishop of Birmingham, in a sermon preached at the University of Oxford, said: "I speak now only of the Church's spiritual life. But here, again, we appear to be failing equally as much, that is, as we appear to be failing in the definition of negative law. The perilous tendency among us is to appeal always to averages or majorities; to ask ourselves what sort of religion we can induce men in general, rich or poor, to accept and welcome; to make religion easy; to abstain from asking too much; to accommodate the requirements of religion to what we suppose men in general will be ready to accept. Nothing could be so directly contrary to the method of Christ. He never will suffer the best to be sacrificed to what may be supposed to be the average requirement. He moves on his way relentlessly, presenting the high and complete claim, though it become more and more evident that his people as a whole may reject it. He never turns aside to remodel his religion, and to accommodate it to what would be found generally to commend itself to each class; to Sadducee or to Pharisee; to accommodate it to what would be found compatible with the politics of the one and the prejudices of the other, or to what the mass of the people might be prepared to accept without too much effort. Our Lord chose and sanctified exactly the opposite method. He appealed with the whole truth, for the whole of the man's heart." 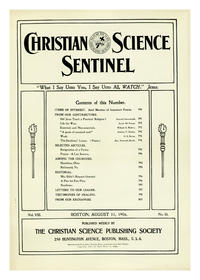