Our Debt to Christian Science

One of the leading elders in the church of Dr. Coyle, a recent moderator of our General Assembly, told me the most remarkable thing he has ever had to reckon with is the rapid growth in Denver of the Christian Scientists. "And that is not all," he says. "They have not only built the most beautiful church in the great Middle West, at a cost of more than $200,000, but all has been given without the least urging on the part of any one for it." "But far more than this," he went on to say, "these people seem to just live the most beautiful upright lives; so that you cannot help but feel that wherever you meet them, whether socially or in business, they exhibit something that the rest of us have not." Surely we owe any system of truth a debt of the greatest gratitude that will bring forth such heavenly fruitage as this.

One of the most influential attorneys of Cleveland told me that he dropped into one of the Wednesday evening meetings of the Scientists, and to his utter amazement, found more than five hundred present. But the strangest and most startling thing of all to him was that he counted more than seventy-five people there who but a few years before were the leading members in two of the strongest Presbyterian churches of the city—men and women many of whom were the pillars both spiritually and financially of the churches from which they had gone out. He said he asked a number of them afterwards the cause of their religious exodus, and almost invariably the reply was that now for the first time did religion seem a real joy to their life; the Bible a book they really understood and loved to read; and God the "Great Companion," whom they knew was ever and for ever lovingly present. Surely our hearts must be as hard as stone if there flows not forth abounding gratitude for such a heavenly awakening in the lives of any of His children as this.

Send a comment to the editors
NEXT IN THIS ISSUE
Article
The Empress Dowager [of China] has joined the reform... 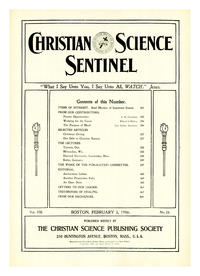