On Sunday, March 2, a large and appreciative audience of nearly three thousand people greeted Judge William G. Ewing at the Grand Opera House. In the balcony and on the main floor all the standing-room was occupied. Several hundred were turned away for lack of room. The lecturer was introduced to the audience by the Rev. W. D. Simonds, pastor of the flourishing Unitarian Church, as follows :—

My Friends:— More than thirty-five years ago a New England lady, who had endured her full share of human suffering, first published to the world what is now known as Christian Science. Gathering about her a few pupils, she founded a school of that faith. This new faith met first with ridicule. It became the object of every nimble paragrapher's sarcasm. As it grew in numbers it became the object of opposition and, in not a few instances, of persecution. It would be a gratuitous insult, and perfectly futile, to suggest that the Christian Science denomination has not its full share of intelligent and thoughtful men and women. 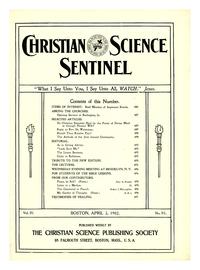