Last week a parliamentary paper was issued in London, giving the terms of a practical alliance between Great Britain and Japan for the preservation of peace in China and Korea. The agreement, which was signed in London, January 30, went into effect immediately and is to remain in force five years. In explanation of the matter Lord Lansdowne said that both Great Britain and Japan "desired that the integrity and independence of the Chinese Empire should be preserved, and that there should be no disturbance of the territorial status quo, either in China or the adjoining regions." The new alliance has excited widespread comment in the capitals of Europe. It is stated that the treaty is viewed with sympathy in Washington, as it is precisely in line with the aims of the State Department.

Great Britain, Japan, and the United States have entered a protest against the secret arrangement of China and Russia with the Russo-Chinese Bank by which Russia was granted concessions in Manchuria. This may cause delay on the part of China in signing the agreement. The new alliance of Japan and Great Britain, whose "policies and interests in the East were found to be identical," may operate still further to delay or even prevent the signing of the compact. 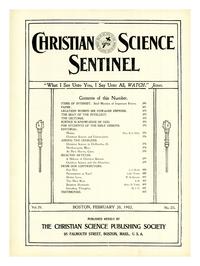