A recent number of the Dayton Weekly Hearld contains the following account of testimonies given at a Wednesday evening meeting of the Christian Scientists there:—

A gentleman stated that his brother had recently returned from the West and spoke of a demonstration. The daughter of a mine superintendent had spinal trouble. The physicians where he lived being unable to relieve her, she was taken to California where a further medical trial was given. She was placed in a plaster-of-paris cast, but continued to grow worse. Finally Christian Science aid was sought and the child was restored to perfect health. 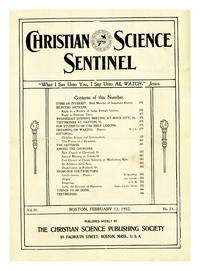