I was led to seek Christian Science for my son who was...

I was led to seek Christian Science for my son who was seventeen years old and had had epileptic fits ever since he was eighteen months old, off and on, and at last had them every four or five weeks and would have two or three one after another. We had tried the best doctors and everything we could hear of, and when everything else failed we tried Christian Science, although we had but little faith in it. He was cured almost instantly. That was two years ago this month. He has been hearty and well ever since, and he has not taken a drop of medicine since he has been led to know the blessed Truth will make him free.

I would like to tell what blessings we have received in the last year, but I am afraid it would take up too much room. We have seven children, and we have all been wonderfully blessed in different ways almost as great as my son's being healed.—MRS. W. W. HILLS, Kalkaska, Mich. 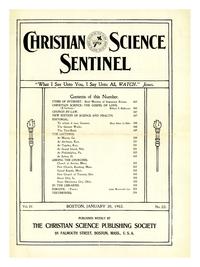